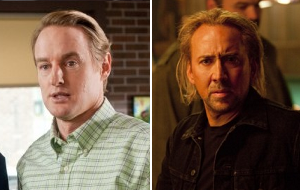 With Hall Pass, The Farrelly Brothers will try to land their first blockbuster since 2000's Me, Myself and Irene. Since putting out that Jim Carrey vehicle, the duo has released Stuck On You, Osmosis Jones, Fever Pitch and The Heartbreak Kid—all four failed to achieve real financial success. Hall Pass only has a slim chance of reversing that downward slope. Owen Wilson is hit-and-miss at best, and Jason Sudeikis is only just beginning to generate some drawing power of his own. It also doesn't help that the raunchy comedy's premise will doom it to skew heavily male.

According to the most recent WebWatch for unreleased films, Hall Pass has only a 2.53% market share of online opinions. That's not a bad number considering that the the comedy will skew older.

Hall Pass lacks real support on Facebook. The comedy only has slightly more than 5,000 fans. Get Him to the Greek—another male-skewing comedy—had close to 59,000 on the Wednesday before hitting theaters. On Twitter, Hall Pass is far behind the likes of Dinner for Schmucks and Hot Tub Time Machine.

As of 4 p.m. PT, Fandango.com is reporting that Hall Pass is responsible for an underwhelming 2% of daily sales.

Look for Hall Pass to open to a respectable $16 million from around 3.000 locations.

2011 isn't shaping up to be a great year for Nicolas Cage. Season of the Witch opened in January and it has only grossed $24.4 million. Drive Angry doesn't look like it will do much better. The market for campy 3D flicks is limited. Just look at Piranha 3D, which raked in only $25 million.

According to WebWatch, Drive Angry boasts only a 3.71% market share of online opinions among unreleased films. That's pretty bad for a film aimed at males 18-34.

Drive Angry actually has a pretty decent following on Facebook of close to 80,000 supporters. Then again, when compared to Scott Pilgrim vs. the World—another film aimed at the "fanboy" crowd--that count seems mediocre. Scott Pilgrim had nearly 300,000 fans on the Wednesday before opening. On Twitter, Drive Angry in inspiring less tweets than The Sorcerer's Apprentice, but more than Season of the Witch.

Fandango reports that Drive Angry has yet to make a dent in daily sales. That could change on Thursday as more moviegoers plan for the weekend.

Drive Angry should open to $11 million from around 2,200 locations.