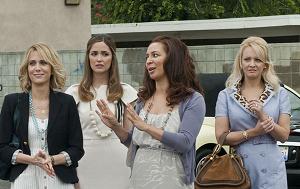 This week, we've added two new films to our Long Range Forecast. Bridesmaids and Priest are both scheduled to hit theaters on May 12.

Bridesmaids star Kristen Wiig is poised to break out in a big way, and this is the film that could do it for her. Early reviews out of SXSW are quite positive. Boxoffice's Todd Gilchrist writes that, "The cast's collective efforts easily transcend conventional chick-flick camaraderie, which is terrific news for the film's marketing team and the male viewers they hope to entice. Expect critical adulation and brilliant box office prospects." The film was also produced by Judd Apatow, and he has more hits than misses as a producer.

Priest looks like it could end up turning into one of Summer '11's biggest duds. Star Paul Bettany isn't exactly a reliable draw at the box office and the supporting cast—Cam Gigandet, Christopher Plummer and Lily Collins—provides little help in that area. The apocalyptic subject matter may also be a little too dark for audiences looking for traditional summer escapism.