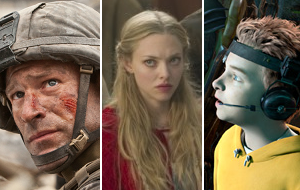 The latest alien invasion flick should have no problem trumping a modern take on a classic fairy tale and Disney's new animated adventure at the box office this coming weekend.

Battle: Los Angeles is a prime example of how keeping a film's marketing campaign intentionally vague can really pay off. The teaser for the Sony/Columbia release was nearly as successful as what the studio put together for District 9, and that alien-themed film went on to rake in a healthy $115.6 million domestically. While Battle: Los Angeles may have a tough time hitting that mark—District 9 had the advantage of being a summer release—it could end up pretty close. A #1 finish for Battle: Los Angeles will be quite an accomplishment considering that stars Aaron Eckhart and Michelle Rodriquez are far from reliable draws. It just goes to show that star power isn't everything.

According to BoxOffice.com's most recent WebWatch report, Battle: Los Angeles boasts a healthy 8.73% market share of online opinions among unreleased films. It's second only to Water for Elephants.

Battle: Los Angeles is having a strong week on Facebook. The sci-fi extravaganza's most active page has tacked on more than 7,000 new supporters since early Monday morning, pushing its total beyond 162,000. Most #1 openers add around 2,000 new supporters a day. On Twitter, Battle: Los Angeles is inspiring more tweets than The Book of Eli and Skyline.

Look for Battle: Los Angeles to rake in $30 million from around 3,000 locations during its debut frame.

Director Catherine Hardwicke brings a dark, foreboding tone to the classic tale of Red Riding Hood. Hardwicke is the director responsible for launching the Twilight franchise, so she certainly knows how to make a product that appeals to teens. Star Amanda Seyfried is building a strong following among twentysomethings, and that will help expand Red Riding Hood's audience. Yet Seyfried is still on her way up and she's not quite a blockbuster draw yet. Letters to Juliet, her last starring role, opened to $13.5 million. Looks for Red Riding Hood to improve on that by a respectable margin.

According to WebWatch, Red Riding Hood boasts a 6.22% market share of online opinions among unreleased films. That puts it right behind Battle: Los Angeles.

On Facebook, Red Riding Hood has a weak following for a film that will skew heavily female. The Warner Bros. release's most active page only has more than 53,000 supporters—Letters to Juliet had more than 200,000 at the same point before release. Twitter activity isn't very reassuring either considering that Red Riding Hood trails the likes of The Last Song and The Roommate.

Expect Red Riding Hood to grab $16.5 million from around 2,900 locations during its opening weekend.

Mars Needs Moms will be hurt quite a bit by the fact that it's opening just a week after Rango. While it could still eventually find more of an audience after Rango begins to subside, Disney should not expect a #1 debut.

On Twitter, Mars Needs Moms is trailing Rango and Gnomeo & Juliet by a substantial amount. It's Facebook fan count of 27,000+ is also very weak. Rango had more than 216,000 fans on the Wednesday before hitting theaters.

Look for Mars Needs Moms to bring in a mediocre $13.5 million from 3,000 locations during its first weekend in theaters.