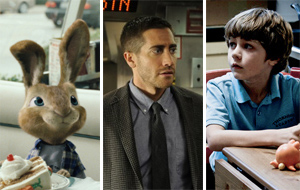 Easter comes early to the box office this weekend, as Universal's HOP appears set to top both Summit's Source Code and FilmDistrict's Insidious with ease.

On the heels of the break-out success of last year's computer animated Despicable Me, HOP represents the second film from Universal and Illumination Entertainment. This time around the film is a mix between computer animation and live action. While HOP isn't expected to have anywhere near the same type of box office impact as Despicable Me did, it looks to be shaping up as a solid performer in its own right. Universal recently shifted gears by releasing a new trailer that focused more on the film's animated elements; a move that should pay off this weekend. HOP won't have the advantage of 3D surcharges, but Paramount's Rango recently proved that isn't a huge obstacle to overcome for family fare.

With HOP expected to skew extremely heavily towards family audiences and younger moviegoers, it isn't a surprise that its online presence is a bit muted in some areas. According to BoxOffice.com's most recent WebWatch data, HOP is currently responsible for a 1.88 percent share of online opinions among upcoming films. This trend has been mirrored on Twitter, but HOP has been able to generate decent levels of Twitter buzz for a family film, especially given the obstacles in tracking the film's common name.

On the other hand, the film's performance on Facebook has been a different story. As of Wednesday afternoon HOP has totaled over 520,000 fans on Facebook, with more than 25,000 of those being added since early Monday morning. That is very impressive for a family film aimed at children and compares very well to Despicable Me, which had 135,000 fans the Wednesday before its theatrical release.

As of 4 p.m. PT, Fandango.com is reporting that HOP is responsible for a very promising 23 percent of daily sales.

HOP will also have the advantage of playing in an estimated 3,400 locations this weekend. Hitting the marketplace two weeks before Fox's Rio should also help its cause, at least over the next two weeks. Look for HOP to lead the box office this weekend with $23 million.

With Source Code, Summit will try to duplicate the success it had back in the spring of 2009 with Knowing. Lead actor Jake Gyllenhaal is by no means an automatic draw at the box office, but Source Code had been generating solid levels of online interest in the weeks leading up to its release. However, those levels have dropped off a bit in the past week; a sign that strongly suggests a lack of break-out potential for Source Code. It is very possible that the recent break-out success of Limitless has taken a bit of the wind out of the sails of Source Code.

According to WebWatch, Source Code is currently responsible for a modest 3.19 percent of online opinions among upcoming films. Over on Twitter the film is trailing the likes of recent films such as I Am Number Four, Limitless and Sucker Punch. The film did see Tweet levels pick up greatly on Tuesday, only to see them fall back down on Wednesday.

On Facebook, Source Code has registered just under 90,000 fans as of Wednesday afternoon. However, the film has only been able to add roughly 200 new fans since Monday, another sign of weakening buzz for the film at the wrong time. Still, the film's total number of Facebook fans is far higher than those of Limitless and The Adjustment Bureau at the same point in time.  Each of those films had totaled 37,000 fans the Wednesday before their respective releases.

As of 4 p.m. PT, Source Code has yet to enter Fandango's top five.

Look for Source Code to debut in second this weekend with $14.5 million from an estimated 2,800 locations.

Insidious, a PG-13 horror film from director James Wan, marks the first release from new distributor FilmDistrict. Thanks to a late-hitting marketing campaign, Insidious has picked up significant online momentum as it nears its release date.

On WebWatch, Insidious is responsible for a 4.92 percent share of online opinions among upcoming releases. That is the highest figure of this weekend's three wide releases. Insidious is also generating more tweets than this weekend's other wide releases. However, PG-13 horror films and thrillers in general tend to generate very high levels of activity on Twitter. With that in mind, Insidious hasn't been able to match the Tweet levels of films such as The Last Exorcism and The Roommate. But it isn't light years away from those films either, especially after picking up steam on Tuesday.

Facebook is proving to be a much less promising sign for Insidious, as it has only registered just under 12,000 likes as of Wednesday afternoon. That figure is quite low for a horror film.

As of 4 p.m. PT, Insidious has also yet to enter Fandango's top five.

While teenage boys should lean towards Source Code, teenage girls are likely to lean towards Insidious. That should help close the gap a bit between the two films this weekend. Look for Insidious to debut with $10.5 million from 2,408 locations, as it should finish just behind Fox's Diary of a Wimpy Kid: Rodrick Rules for fourth.