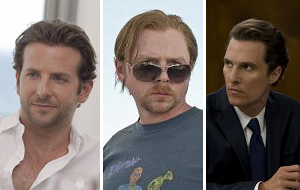 Three new releases may not be enough to topple Battle: Los Angeles at the box office during what's shaping up to be a highly competitive weekend.

BoxOffice.com is currently giving an edge to Limitless, but not by much. A Battle: LA repeat is still a strong possibility, and Rango could even sneak up and reclaim the top spot if Battle: LA drops like a stone and Limitless underperforms.

Limitless represents a major test of star Bradley Cooper's drawing power. Cooper is coming off of two post-Hangover duds: The A-Team and Case 39. If Limitless is a hit, the actor will have plenty of momentum heading into the May 26 release of The Hangover Part II. If it falls flat, there will inevitably be serious conversations about whether or not he's a viable leading man. Luckily, the supporting presence of Robert De Niro should help bring in older moviegoers. It also doesn't hurt that the film has an easily digestible high-concept premise: Guy takes pill. Guy becomes smart and suave.

According to BoxOffice.com's WebWatch data, Limitless boasts a healthy 5.51% market share of online opinions among unreleased films. It only trails three heavyweights: Super 8, Water for Elephants and Transformers: Dark of the Moon.

As of 3 p.m. PT, Fandango.com is reporting that Limitless has yet to crack the top five sellers list. That's bound to change tomorrow as more moviegoers plan for the weekend, and if it doesn't that will mean trouble.

Expect Limitless to manage a slim first place finish with $16.5 million from around 2,400 locations.

Word-of-mouth seems to be mixed at best for Battle: LA, and it suffered a 1% drop from Monday to Tuesday when all the other films in the top 10 saw increases. The sci-fi flick only has a 65% approval rating on Flixster from nearly 38,000 user reviews.

Fandango is reporting that Battle: LA boasts 12% of daily sales.

Look for Battle: LA to land in second with $16.5 million during its sophomore frame.

Paul seems to be more of a cult hit than a genuine blockbuster. Stars Simon Pegg and Nick Frost have a loyal following thanks to the success of Shaun of the Dead, but they are far from reliable draws. Paul is going to have a tough time hitting demographics outside of the "fanboy" base.

According to WebWatch, Paul only has a 2.2% market share of opinions among unreleased films. That's not a great number for a film that will have a appeal mostly to males 18-34.

Paul's Facebook fan count of more than 160,000 isn't all that impressive when compared to the nearly 300,000 fans that Scott Pilgrim vs. the World had on the Wednesday before hitting theaters. Pilgrim, which did come up with a relatively small built-in audience, appealed to the same audience as Paul and it opened to a mediocre $10.6 million last August. On Twitter, Paul is outpacing the likes of The Invention of Lying and Repo Men.

Fandango is reporting that Paul has yet to crack to the five sellers list. That's a disconcerting sign.

The Lincoln Lawyer finds star Matthew McConaughey outside of his rom-com comfort zone, and that's normally not a good thing. Both Two for the Money and We Are Marshall—two dramas—bombed with McConaughey in the lead role. Luckily, Lincoln Lawyer is winning plenty of strong reviews. It could still turn into something of a sleeper hit if audiences enjoy it as much as critics.

Fandango is experiencing a rush of sales for Lincoln Lawyer due to Groupon's promotion of $6 tickets. The promotion will last for two days, and the high volume skews the normal expectations that result from online sales data.

We're predicting a modest $9.5 million start from 2,400 locations for The Lincoln Lawyer.

Check out our predictions for the rest of the top 10 in the table below.