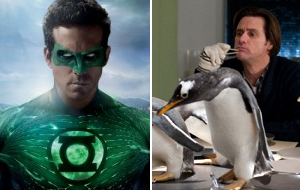 We've added Green Lantern and Mr. Popper's Penquins to our Long Range Forecast this week. Both films are set to hit theaters on June 17.

Warner Bros. will be hoping that Green Lantern can launch another superhero franchise, but a lot depends on whether or not moviegoers are feeling some superhero fatigue. Four origin stories open this summer: Thor in May, Lantern and X-Men: First Class in June and Captain America: First Avenger in July. While there may be room for all of them, we're betting that the similarities will create a strong case of déjà vu for audiences.

Lantern stars Ryan Reynolds and Blake Lively are both on their way to becoming major draws, but they might not be at the point yet where they can open a summer tentpole. We're sticking with a conservative forecast at this time.

Mr. Popper's Penquins will represent a big test for star Jim Carrey. The rubber-faced actor has been able to hang around for a while even as other comedic actors have been gunning for his audience. He might still be able to deliver a blockbuster, but he'll have to work a miracle with Penquins. The first trailer generated a weak amount of buzz on Facebook and Twitter.

The toughest factor that Penquins will face is that it opens a week before Cars 2, which is guaranteed to gobble up family crowds. If families decide to save their money for that Disney/Pixar sequel then Penquins could be in real trouble.