Weekend Predictions: 'Pirates of the Caribbean: On Stranger Tides' 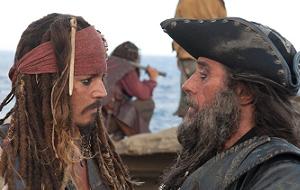 The other major studios have wisely stayed away from opening against Disney's Pirates of the Caribbean: On Stranger Tides juggernaut this weekend. Expect massive receipts.

There's no question that Johnny Depp's Captain Jack Sparrow has become one of the most iconic and instantly recognizable film characters of all time. Now fans of the Pirates franchise will be treated to a bigger dose of the off-the-wall marauder. Depp's operating at the top of his game, so carrying a summer tentpole on his shoulders is not an issue.

Pirates will undoubtedly have a huge opening weekend, but its longevity is up in the air. Kung Fu Panda 2 and The Hangover Part II will dilute On Stranger Tides' power considerably when they open during Memorial Day weekend.

According to Boxoffice.com's WebWatch, On Stranger Tides boasts a healthy 15.77% market share of online opinions among unreleased films. It's promising to see that level of enthusiasm for the fourth film in a franchise.

The Pirates of the Caribbean Facebook page has tacked on 55,000+ new likes since early Monday morning for a total of nearly 5.4 million. Comparatively, Fast Five's added around 84,000 during the same period of time in the release cycle. On Twitter, On Stranger Tides' performance leaves a bit to be desired—the tentpole trails such blockbuster sequels as Toy Story 3 and Harry Potter and the Deathly Hallows: Part I by a pretty wide margin.

As of 4 p.m. PT, Fandango.com is reporting that On Stranger Tides is responsible for a healthy 52% of daily sales. That's the kind of dominant share of sales you would expect from a soon-to-be blockbuster.

Look for Pirates of the Caribbean: On Stranger Tides to bring in $92 million from close 4,000 locations during its debut frame.

Even though Thor was able to fend off Bridesmaids last weekend, it looks like the female-skewing comedy will overtake Paramount's latest superhero flick this weekend.

The Bridesmaids Facebook page has tacked on a solid 12,000+ new likes since opening last Friday. Meanwhile, nearly 22,000 Flixster users have combined to give the film a solid 88% approval rating.

Fandango is reporting that Bridesmaids accounts for 20% of daily sales, while Thor has dropped to 4%.

Tags: Pirates of the Caribbean: On Stranger Tides, Thor, Bridesmaids