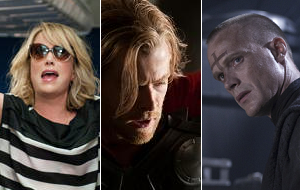 Thursday Afternoon Update #2: Fandango is reporting that Bridesmaids is responsible for 31% of daily sales as of 3 p.m. PT. Other stats from the ticketing site:

• 35% of ticket-buyers were men.
• 54% of moviegoers say the raunchy R-rated humor makes them even more interested in seeing Bridesmaids.
• 76% say that smart, female-driven comedies are underrepresented on the big screen.

Wednesday Afternoon Update: Thor will have no problem fending off two newcomers this coming weekend in order to remain the #1 film in North America.

Even though Thor's $65.7 million opening didn't come close to matching Iron Man's $98.7 million debut, the superhero flick should manage to hold up well over the next couple of weeks. It certainly helps that expectations are modest for both Bridesmaids and Priest—neither film is being pegged as blockbuster material.

All signs point to strong buzz for Thor. The film's most active Facebook page has added more than 165,000 likes since last Friday, and 85,000+ Flixster users have combined to give it a promising 83% approval rating.

As of 4 p.m. PT, Fandango.com is reporting that Thor leads daily sales with 26%. A dominant number like that is to be expected from the reigning champ.

Look for Thor to rake in $33 million during its sophomore frame.

Bridesmaids could be a huge film for star Kristen Wiig. The Saturday Night Live veteran has been building up fans for a couple of years and now it's time for them to support her in a lead role. Yet even if Bridesmaids doesn't open to earth-shattering numbers there's a chance that it will deliver a solid cume in slow-burn fashion. Early reviews indicate that word-of-mouth should be mostly positive.

According to Boxoffice.com's WebWatch, Bridesmaids has only a 3.27% market share of online opinions among unreleased films. That's not really cause for concern since comedies aimed at females tend to deliver a lower volume of activity.

Fandango is reporting that Bridesmaids is responsible for a promising 11% of daily sales. That's a very good number for a film that isn't based on an established property.

Bridesmaids should manage $17.5 million from 2,700 locations this weekend.

Priest star Paul Bettany is far from a reliable draw, but he did lead Legion to a $17.5 million debut in January 2010. Priest is helmed by Scott Charles Stewart—the same guy behind Legion—and both films also deal with religious themes in a sci-fi setting. Sony is clearly hoping that lightning will strike twice.

According to WebWatch, Priest holds only a 3.57% market share share of online opinions among unreleased films. That's not an impressive number for a film that will certainly have a strong appeal among the fanboy crowd.

Priest has built a solid following on Facebook. The film's most active page boasts 142,000+ likes, and that compares well to the 95,000 likes that The Last Exorcism had on the Wednesday before hitting theaters. On Twitter, Priest is outpacing Legion, but it still trails Daybreakers and Resident Evil: Afterlife 3D.

Fandango is reporting that Priest accounts for 3% of daily sales. That number could pick up on Thursday as more moviegoers plan for the weekend.

Expect Priest to grab $16.5 million from around 2,800 locations during its debut frame.