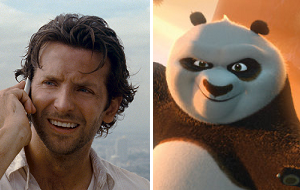 Friday Morning Update #2: Warner Bros. is currently reporting $31.66 million for The Hangover Part II on Thursday. That number may change this afternoon.

Kung Fu Panda 2 was able to grab only $5.8 million on Thursday. That's an incredibly underwhelming start for the animated flick.

Friday Morning Update: Fandango is reporting that The Hangover Part II boasts the top pre-sales and opening day ticket sales for any comedy in the company's 11-year history.

Wednesday Update: The Hangover Part II should have no problem trumping Kung Fu Panda 2 over a five-day holiday frame that is bound to be very prosperous.

This weekend will be a breath of fresh air for an industry that's still reeling after an underwhelming first quarter. There's no question that 2011's Memorial Day weekendwill be far more successful than 2010's. Last year, Sex and the City 2 and Prince of Persia: Sands of Time opened to underwhelming numbers. SATC 2 managed only $45.2 million over four days, and Prince of Persia grabbed $37.8 million.

The Hangover 2 alone will top the four-day haul of SATC 2 and Persia. Warner Bros. has an unprecedented comedic juggernaut on their hands and expectations are extreme as a result. The original film raked in $459.4 million, and if the sequel can take in even 80% of that it will be seen as a massive success. The Hangover Part II will come as close to being a four-quadrant hit as a raunchy, obscene, R-rated flick can manage.

According to Boxoffice.com's WebWatch, The Hangover Part II currently boasts a 38.72% market share of online opinions among unreleased films. The closest film is Transformers: Dark of the Moon with 11.92%.

The Hangover's Facebook page has added an more than 177,000 new likes this week. That's a solid increase for a page that already had 12.9 million likes heading into the week. On Twitter, The Hangover Part II is in a league of its own. WB's comedy is easily inspiring more tweets than the likes of Paranormal Activity and Iron Man 2.

As of 4 p.m. PT, Fandango.com is reporting that The Hangover Part II is responsible for a dominant 82% of daily sales. That's a clear sign that midnight grosses are going to be huge.

Look for The Hangover Part II to take in $29 million on Thursday and $100 million from Friday-Monday.

Kung Fu Panda 2 is the first true family film of the summer—a major advantage to be sure. The original took in a staggering $631.7 million in 2008, and with critics saying that the sequel is just as good as the original there's no reason to expect that KFP2 can't match or even top its predecessor.

According to WebWatch, KFP2 has a solid 6.90% market share of online opinions. That's very healthy for a film aimed mostly at young children.

The Kung Fu Panda Facebook page has tacked on 74,000+ new likes since early Monday morning. To put that into perspective, Toy Story 3's page added 219,000+ during the same period in its release cycle. On Twitter, KFP2 is outpacing Shrek Forever After, Despicable Me and Rango.

Fandango is reporting that KFP2 only accounts for 2% of daily sales. The film should rebound in a big way on Thursday as more families plan for the weekend.

Expect Kung Fu Panda 2 to rake in $11 million on Thursday and $90 million from Friday-Monday.

Check out the rest of our top 10 predictions for the four-day weekend in the table below.