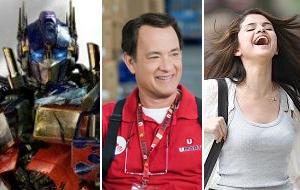 Transformers: Dark of the Moon will dominate multiplexes this July 4th weekend as it aims to become the biggest movie of Summer 2011. Larry Crowne and Monte Carlo will have to settle for leftovers.

Dark of the Moon is already off to a great start with $13.5 million in the bank since Tuesday night. The third film in the franchise seems to be making up for the disappointing reactions to 2009's Transformers: Revenge of the Fallen. More than 60,000 Flixster users have combined to give Dark of the Moon an incredibly impressive 90% approval rating.

As of 4 p.m. PT, Fandango.com is reporting that Dark of the Moon is responsible for a combined 72% of daily sales—41% for 2D shows and 31% for 3D. The closest film is Harry Potter and the Deathly Hallows: Part II with 8%.

Transformers: Dark of the Moon should be able to manage $101 million from Friday-Monday for a domestic cume of $177 million.

Universal is hoping that Larry Crowne will represent counter-programming for adult moviegoers who aren't interested in watching a bunch of robots duke it out. The combination of Tom Hanks and Julia Roberts will earn a certain amount of trust that can't be gained with even the most expensive marketing blitz.

Fandango is reporting that Larry Crowne has yet to crack the top five sellers list.

Look for Larry Crowne to bring in $19.5 million from around 2,750 locations over the extended weekend.

Is Selena Gomez the next Miley Cyrus? Not yet. The buzz surrounding Monte Carlo is far from deafening. The young actress has a solid base, but its numbers don't come anywhere near what Cyrus commanded in her prime as a teen idol. As a result, expectations for the 20th Century Fox release are modest.

One disconcerting factor is how poorly Monte Carlo is performing on Facebook and Twitter compared to Prom, Disney's teen-skewing April release. Prom made only $4.7 million during its debut frame.

Expect Monte Carlo to grab $8.5 million from around 2,450 locations during the holiday frame.