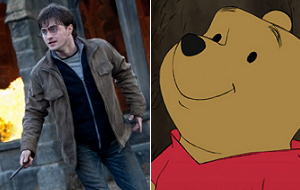 The Harry Potter franchise will end with a bang at the box office this weekend, while Winnie the Pooh will have to struggle to make a mark.

Expectations are very high for Deathly Hallows: Part II and the final installment in the juggernaut franchise should have no problem matching them. A $1 billion worldwide haul seems like a real possibility by the time the film leaves theaters. The last couple of films have come close to that mark and interest levels are decidedly higher for Part II. It's becoming clear that even casual fans of the franchise (read: people who have seen 2-3 films) are coming back to be part of the phenomenon. Multiple viewings during opening weekend are also to be expected from the rabid fan base. Combine those two factors and you have a recipe for massive success.

As of 4 p.m. PT, Fandango.com is reporting around 5,000 sold-out shows. Advance sales in general have already hit a record-setting $32 million.

Look for Harry Potter and the Deathly Hallows: Part II to take in $151 million from 11,000 screens and 4,375 locations—another record on both counts for the series—during its debut frame.

Winnie the Pooh represents an interesting bit of counter-programming to Potter. The traditionally animated flick will makes for a very viable option for families with children who are too young for the relatively dark thrills of the Potter world. Older fans seeking a rush of nostalgia will surely catch up with the loveable bear after they get their Potter fix, and that means that Pooh should show solid staying power.

Expect Winnie the Pooh to manage a respectable $10 million from around 2,300 locations.

Check out our predictions for the rest of the top 10 in the table below.