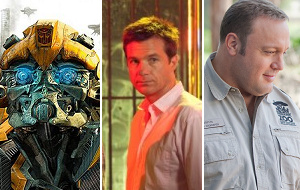 Newcomers Horrible Bosses and Zookeeper won't have enough fire power to topple Transformers: Dark of the Moon at the box office this coming weekend.

All signs point to a renewed faith in the Transformers franchise thanks to Dark of the Moon. The third film in the series boasts an A rating from CinemaScore, and more than 60,000 Flixster users have combined to give the film an impressive 90% approval rating. Both of those factors bode well for its staying power in the weeks to come.

As of 4 p.m. PT, Fandango.com is reporting that Dark of the Moon is responsible for a solid 14% of daily sales. Harry Potter and the Deathly Hallows: Part II dominated the day with 62%.

Look for Transformers: Dark of the Moon to rake in another $47 million during its sophomore frame.

Horrible Bosses boasts one of the most impressive ensemble comedies of the summer. Jason Bateman, Jason Sudeikis and Charlie Day are supported by Kevin Spacey, Jennifer Aniston, Colin Farrell and Jamie Foxx. A cast like that is bound to earn a lot of trust from mainstream moviegoers. It also helps that the market is ripe for comedies aimed at adults after the success of Bridesmaids, The Hangover Part II and Bad Teacher.

Fandango is reporting that Horrible Bosses has yet to crack the top five sellers list, but that's hardly a reason to panic with the dominance of Deathly Hallows: Part II and Dark of the Moon.

Expect Horrible Bosses to bring in $25 million from around 2,900 locations during its debut frame.

Kevin James isn't your typical movie star, but he has no problem filling seats. Paul Blart: Mall Cop was a surprise success, and James helped boost Grown Ups' grosses last summer. Zookeeper is gunning for more of the Paul Blart crowd. The recent disappointing performance of Mr. Popper's Penguins certainly makes room for Zookeeper, but it could also mean that moviegoers are growing tired of A-list stars talking to animals. James' drawing power should be strong enough to overcome any talking animal fatigue.

Fandango is reporting that Zookeeper has yet to crack the top five sellers list. That could change on Thursday as more families plan for the weekend.

Zookeeper should manage $23 million from 3,300 locations.