A Fighting Chance: Why 'Warrior' May Stick Out During A Crowded Fall Season 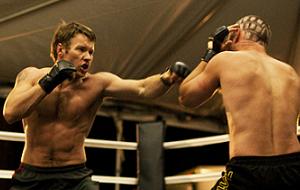 Will Lionsgate's Warrior cause many sold-out shows during its opening weekend? Probably not. Will it shatter any opening-weekend records? Highly unlikely. Will it be able to hold on for weeks and even months to come as it slowly finds an audience? It looks like it could.

Warrior has a lot going for it. A current approval rating of 87% on RottenTomatoes.com means critics are being kind. 206,000+ Facebook likes and counting on its official page means that moviegoers are responding in a big way to the marketing blitz. When critics and audiences align, that's usually a recipe for success.

In order to hopefully get an early jump on creating positive buzz, Lionsgate decided to send Warrior out to around 550 locations this past Sunday. Early signs indicate that it worked. The film's Facebook page has added more than 3,000 likes since early Sunday morning. Tweets for Warrior carry a staggering 99:1 positive:negative ratio today.

Just like its main characters, Warrior is an underdog. During its first frame it will have to compete with Contagion, the latest star-studded ensemble drama from Steven Soderbergh. In the weeks to come, Warrior will face opposition for coveted male demographics from such tough opponents as Drive (9.16), Killer Elite (9.23), Moneyball (9.23) and Lionsgate's own Abducted (9.23). This is where buzz will need to step in and help stop the drama's audience from being diluted. If moviegoers aren't recommending Warrior to all their friends, then it could die a quick death or become known only as a cult hit rather than a mainstream phenomenon.

David Spitz, Lionsgate's president of theatrical distribution, remains cautiously optimistic. Spitz speaks about glowing Warrior reactions in the same way that a parent would point to a refrigerator full of "A+" accomplishments by their child—there's pride, but also the fear of building up expectations too much.

"The way we're positioning it is that it's a marathon, not a sprint. We're hoping that our multiple is going to be much higher than the industry average," says Spitz.

Showing the film to crowds early has been reassuring in another key way: Warrior isn't appealing only to males even though it features plenty of brutal fights

"We screened the film in a number of different venues and the general response has been phenomenal from women," boasts Spitz.

Buzz for Warrior will also be helped along by the Oscar talk that's currently floating around. Oscar buzz can give any flick an extra bump at the box office—just look at what happened last year to The Fighter. The Paramount release grossed $74 million before snagging seven Oscar nods and another $20 million after nominations were announced. That doesn't even take into account the impossible-to-measure impact Christian Bale's Oscar potential had on making the film a must-see before nominations were announced.

Yet Oscar pundits have mixed reactions when it comes to Warrior's chances of snagging some gold.

"Not a chance in the world for Oscar impact. Forget it. It's not that kind of film," says Jeffrey Wells of Hollywood-Elsewhere.com. "It's an emotionally rousing MMA sports flick, very well acted and atmospherically believable as far as it goes, but it's very calculated. You can see and feel the buttons being pushed and the levers being cranked."

MovieCityNews.com's David Poland disagrees. In a rave review that ran on 8.15, Poland writes, "Oscar nominations for Nick Nolte, who could win a lifetime achievement Oscar for this great performance, and probably Tom Hardy, who has the more Brando-esque brother role. But this could become an across-the-board nominee. Picture, director, cinematographer, editor, sound, score, and at least two acting nods, Joel Edgerton certainly another possibility."