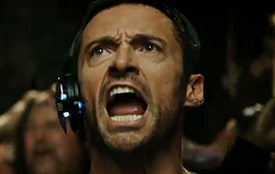 We've added Real Steel, The Ides of March and Wanderlust to our Long Range Forecast this week. All three films are set to open on October 7.

Ready for Transformers meets Rocky? That's the vibe that Real Steel is putting out. The film should be able to rope in a healthy portion of family audiences as well as the fanboy set thanks to a very strong trailer that plays to both.

The Ides of March has "Oscar contender" written all over it, which instantly creates a must-see factor. Last year's crop of Oscar contenders performed surprisingly well and Ides of March should be able to tap into the same well. Director/star George Clooney's mainstream trust is at an all-time high, and co-star Ryan Gosling is skyrocketing to the A-list at a very rapid pace.

Wanderlust stars Jennifer Aniston and Paul Rudd have more than enough drawing power to turn the film into a solid hit. The main problem is that it'll bumping right up against The Ides of March for the attention of adult moviegoers.