Weekend Predictions: 'The Lion King 3D,' 'Drive,' 'Straw Dogs' and 'I Don't Know How She Does It' 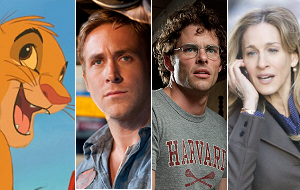 It's just a little bit of history repeating.

The Lion King 3D—a technologically spruced-up version of Disney's 1994 animated hit—will have no problem claiming the top spot at the box office this coming weekend despite facing competition from three other newcomers.

It's quite clear that a strong nostalgia factor is aiding The Lion King 3D. Twentysomethings and even thirtysomethings who watched the film repeatedly when they were younger will want to introduce it to a new generation in a communal way. 3D conversions are often plagued by bad buzz, but this one is being met with open arms.

As of 4 p.m. PT, Fandango is reporting that The Lion King 3D leads daily sales with an impressive 39%.

Expect The Lion King 3D to rake in $19 million from around 2,200 locations during its debut frame.

Drive's biggest asset is its star. Ryan Gosling is on the cusp of becoming a major draw after building momentum considerably this summer thanks to a scene-stealing turn in Crazy, Stupid, Love. Gosling is a true movie star: men want to be him and women want to be with him. The main drawback is that Drive may be a bit too artsy and meditative for mainstream digestion. Even though Drive involves cars, it won't exactly appeal to the Fast & Furious crowd. The FilmDistrict release could still turn into something of a sleeper hit if positive word of mouth spreads fast enough.

Fandango reports that Drive has yet to crack the top five sellers list. That may change on Thursday as more adult moviegoers grow excited thanks to the inevitable rush of glowing reviews.

Straw Dogs is gunning for the same revenge-loving moviegoers who lined up in droves for Taken, Law Abiding Citizen and Unknown. Unfortunately, star James Marsden is not in the same league as Liam Neeson, Gerard Butler or Jamie Foxx. Director Rod Lurie's remake should get a nice little boost thanks to the presence of Alexander Skarsgard—the son of Stellan has shot to fame thanks to his role on HBO's True Blood.

No signs of life on Fandango for Straw Dogs as of 4 p.m. PT.

Straw Dogs should manage $8 million from around 2,400 locations.

Will Sarah Jessica Parker be able to open a film outside of the Sex and the City franchise? Folks at The Weinstein Company sure hope so. The distributor looks to turn around its losing streak with I Don't Know How She Does It. The problem is that the adult-skewing flick is entering a very crowded market for films aimed at older moviegoers. Expectations are modest at best.

One promising sign is that I Don't Know How She Does It does account for 3% of daily sales on Fandango.

Expect I Don't Know How She Does It to take in $7 million from around 2,800 locations.

Tags: The Lion King 3D, Drive, Straw Dogs, I Don't Know How She Does It