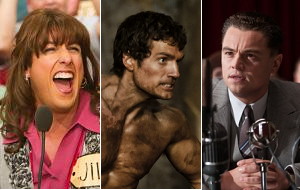 Three wildly different newcomers won't be able to push Puss In Boots out of the top spot at the box office this coming weekend.

Puss In Boots managed a phenomenal hold during its sophomore frame, and it's now on its way to staying #1 for three weekends in a row—not an easy accomplishment. Word of mouth is strong for the DreamWorks Animation title as evidenced by its impressive 80% approval rating from nearly 21,200 Flixster users.

Look for Puss In Boots to rake in $26.5 million this coming weekend.

Immortals, an R-rated epic from stylish director Tarsem Singh, is looking like the strongest newcomer. The Relativity release is gunning for the same audience that turned 300 into a colossal $456 million worldwide hit. As long as moviegoers don't view Immortals as a 300 rip-off it will have a decent shot at snagging a healthy percentage of its predecessor's gross.

As of 4 p.m. PT, Fandango reports that Immortals is responsible for 4% of daily sales. Not bad considering that The Twilight Saga: Breaking Dawn - Part I currently dominates with 72%.

Expect Immortals to open to $23.5 million from around 3,000 locations during its debut frame.

Even though the trailer for Jack and Jill has inspired plenty of jokes, Adam Sandler is still a safe bet at the box office. Nobody expects Jack and Jill to be the comedian's strongest earner, but it should still post solid numbers. The wild card here is whether or not family audiences will show up in a big way. If they do, Jack and Jill could end up stealing away some of the Puss In Boots audience.

Jack and Jill has yet to crack the top five sellers list on Fandango.

Sandler's latest looks poised for a $21.5 million debut from more than 3,000 locations.

J. Edgar looked like a serious Oscar contender on paper, but a wave of less-than-favorable reviews has damped the mood quite a bit for Clint Eastwood's latest. Expect this one to be a hit among moviegoers aged 35+, which means that there won't be a huge rush to see the film opening weekend. Leonardo DiCaprio's star power will do little to bring in patrons who are too young to understand J. Edgar Hoover's impact on this country.

Surprisingly, J. Edgar accounts for 3% of daily sales on Fandango.

J. Edgar should rake in $12.5 million from around 1,900 locations during its debut frame.