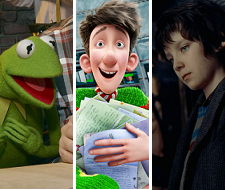 No new wide releases this coming weekend means there will be a battle of the holdovers at the box office. We're giving a slight edge to The Muppets.

Word of mouth is very strong for The Muppets thanks to more than 19,000 Flixster users combining to give the Disney flick an outstanding 92% approval rating. Facebook and Twitter activity remain healthy as well.

As of 4 p.m. PT, Fandango reports that The Muppets is responsible for 17% of daily sales.

Look for The Muppets to grab $16.5 million during its debut frame.

The Twilight Saga: Breaking Dawn - Part I won't be far behind The Muppets. In fact, there's still a strong chance that Summit's cash cow could stay #1 for the third weekend in a row. Even with drastic weekend-to-weekend declines, Breaking Dawn - Part I still has enough of a base to remain at the front of the pack.

Fandango reports that Breaking Dawn - Part I is responsible for 30% of daily sales.

Fandango reports that Hugo is responsible for 7% of daily sales, and Arthur Christmas trailing with 3%.

Hugo should take in $8 million to Arthur Christmas' $6.5 million.