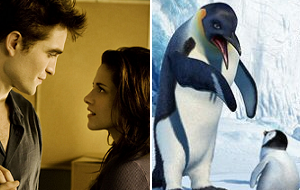 Summit's The Twilight Saga: Breaking Dawn - Part I is poised for a mammoth opening this weekend—but there's still room for Happy Feet 2 to collect plenty of cash from families.

Breaking Dawn - Part I will be bittersweet for Summit and fans of the franchise alike. For Summit, it represents the beginning of the end for a highly-lucrative property. For fans, the process of saying goodbye to beloved characters begins now. Breaking Dawn - Part I should help increase the franchise's popularity quite a bit as more holdouts finally give in to the hysteria that accompanies the end of a cultural sensation. Harry Potter and the Deathly Hallows: Part 2 validated said phenomenon earlier this year.

Fandango reports that there are already more than 3,000 sold-out for Breaking Dawn - Part I, which bodes well for the film's chances of topping the $30 million midnight opening of Eclipse, its 2010 predecessor.

Look for The Twilight Saga: Breaking Dawn - Part I to collect $150 million from more than 4,061 locations. That will be enough to top the $142.8 million opening weekend of New Moon. Eclipse opened on a Wednesday and it made $120 million during its first three days.

Happy Feet Two hits theaters five years after its Oscar-winning predecessor. Warner Bros. is hoping that the property has enough steam left in it to allow for a sequel to match or even exceed the original's impressive $384.3 million worldwide haul. It doesn't look like they'll be disappointed. The animated flick will provide a welcome alternative for families with children who are too young for the Twilight films. Unfortunately, it Happy Feet Two will take quite a hit with the emergence of The Muppets, Arthur Christmas and Hugo next week.

Fandango reports that Happy Feet Two accounts for only 1% of daily sales as of 1 p.m. PT, but that's to be expected in the shadow of Breaking Dawn - Part I.