Long Range Forecast: 'The Three Stooges,' 'Bullet to the Head,' 'Cabin in the Woods' and 'Movie 43' 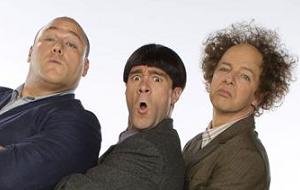 We've added The Three Stooges, Bullet to the Head, Cabin in the Woods and Movie 43 to our Long Range Forecast this week. All four films are scheduled to open on April 13. The Three Stooges is the strongest of the bunch, but overall it's shaping up to be a weak frame.

The Farrelly Brothers have been struggling to get The Three Stooges made for years. After losing some A-list stars—remember when Sean Penn, Jim Carrey and Benicio del Toro were attached?—the duo behind There's Something About Mary and Me, Myself and Irene have managed to complete their passion project. Even after all that struggling, the reality is that this flick will live or die based on how strong Stooges nostalgia is. The Farrelly Brothers can't add much in the way of drawing power these days considering they haven't had a serious hit in more than a decade, and the Stooges are played by Sean Hayes, Chris Diamantopoulos and Will Sasso (read: not quite on the same level as Penn, Carrey and del Toro).

Tags: The Three Stooges, Bullet to the Head, Cabin in the Woods, Movie 43