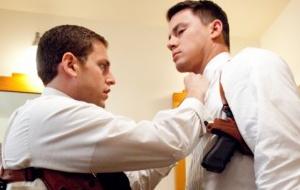 21 Jump Street will benefit immensely from the fact that it's the only new, wide release hitting theaters this weekend. Expect a #1 debut.

The pairing of Channing Tatum and Jonah Hill is winning over plenty of critics—our own Sara Maria Vizcarrondo gave the film 4.5 stars. Critics have been bombarded by a rush of retreads over the last decade, so the fact that they are praising 21 Jump Street bodes well for the comedy's commercial prospects. It also doesn't hurt that Tatum is at the height of his drawing power coming off The Vow—the heartthrob will bring in droves of female patrons. As for Hill, he stumbled a bit with The Sitter last year, but his fans should be quick to forgive. 21 Jump Street can't miss.

Look for 21 Jump Street to grab $31 million from around 3,000 locations this weekend.

Will Ferrell and Jason Segel both have new films opening at less than 500 locations this weekend. Ferrell's Casa de mi Padre should tap into the same audience that loved Machete, while Segel's Jeff, Who Lives At Home will look to slowly build momentum in order to capture Forgetting Sarah Marshall enthusiasts. Both flicks should come in close to the $2 million mark this weekend.