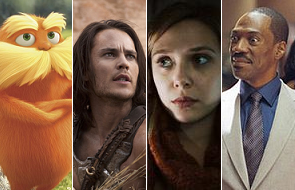 Dr. Seuss' The Lorax will have no problem fending off three newcomers in order to stay #1 at the box office this coming weekend.

The Lorax exceeded most predictions by more than $20 million during its debut frame, so Universal has to be thrilled already. Even with a substantial drop during its sophomore frame The Lorax will have more than enough strength to hold on to first place.

As of 4 p.m. PT, Fandango reports that The Lorax is responsible for 17% of daily sales. That's solid considering that The Hunger Games leads with 46%.

Look for The Lorax to bring in $44 million during its second weekend in theaters.

John Carter is shaping up to be one of the biggest financial disasters of all time. Carter's bloated $250 million budget will make it very difficult for Disney to make a profit. That kind of budget is usually reserved for well-known directors working with A-list actors. Carter boasts neither.

Fandango reports that John Carter accounts for a paltry 4% of daily sales.

John Carter looks poised for a $25 million debut from more than 3,500 locations.

Coming off the success of The Grey, Open Road is back again to challenge the major studios with Silent House, a thriller starring Elizabeth Olsen. Olsen has earned plenty of indie cred thanks to her stirring performance in Martha Marcy May Marlene, but she's far from a reliable draw. Silent House should serve as a stepping stone to bigger things, and it could even turn into a minor sleeper hit.

Fandango reports that Silent House has yet to crack the top five sellers list.

Expect Silent House to grab $11 million from around 2,100 locations.

A Thousand Words may end up being one of the biggest duds of Eddie Murphy's career—and that's saying something. A weak marketing blitz indicates that Paramount has little faith in the comedy. It also doesn't help that Murphy's departure as host of Oscars led to a rush of bad publicity. This one will be out of theaters quickly.

Look for A Thousand Words to take in only $4 million from around 1,500 locations.