Long Range Forecast: 'Brave', 'Abraham Lincoln: Vampire Hunter', and 'Seeking a Friend for the End of the World' 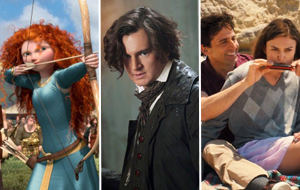 We've added three new releases to our Long Range Forecast this week: Disney/Pixar's Brave, Fox's Abraham Lincoln: Vampire Hunter, and Focus Features' Seeking a Friend for the End of the World.  All three films are currently scheduled to open on Friday, June 22.

Pixar's annual summer release for 2012 will aim to extend their streak of ten consecutive opening weekends over $47 million, eight of which topped the $60 million mark.  The respected studio's five most recent original films (Up, WALL-E, Ratatouille, Cars, and The Incredibles) have averaged a domestic total of $246 million.

- Its reception online has been very positive with 8,000+ tweets generated by its first two trailers -- way above where Cars 2 was at the same point in the marketing cycle.
- Pixar delivers its first original film in three years.
- Prior to last year's Cars 2 ($192 million), Pixar carried a streak of nine consecutive films that reached $200 million domestically.
- Recent heroine-led Tangled was a $200+ million domestic success.  How to Train Your Dragon's ($218 million) Celtic theme also makes it a great comparison.
- Disney has a history of similar female protagonist-centric films which did very well: Mulan, Beauty and the Beast, The Little Mermaid, etc.  The precedence for success is certainly there.

- Cars 2 left a bad taste for some moviegoers, especially considering Pixar's own lofty standards and audiences' expectations of them.
- Madagascar 3 could satiate some of the demand from families looking for a CG animated pic when it opens two weeks earlier, although strong word of mouth for Brave may negate that in the long run.
- Ice Age: Continental Drift being only three weeks away could cut into its holding power.
- Young boys will probably be more attracted to films like The Amazing Spider-Man and G.I. Joe: Retaliation when they open one week later.

- Online buzz is noticeable, at least among the fanboy crowd.
- A historical figure in Abraham Lincoln, vampires, Tim Burton, and Timur Bekmambetov may help give it some much needed clout.
- Bekmambetov's Wanted found huge success as the alternative opener to a Pixar film (WALL-E) in 2008.

- Fanboy hype.  Even Kick-Ass failed to reach $50 million despite strong word of mouth among its target audience.  Scott Pilgrim vs. the World also struggled to top $30 million.
- Whereas Wanted found its success on star power and a widely appealing concept, this could easily fall into more of a niche category just as Jonah Hex did in 2010 -- and there are no recognizable stars to be found.
- There's usually at least one high-profile disappointment in June, and this is the biggest contender for that title.
- The previous Burton/Bekmambetov collaboration, 9, didn't do much at the box office ($32 million).
- Front-loading is likely given the fanboy appeal, especially with The Amazing Spider-Man and G.I. Joe: Retaliation on its heels.

Seeking a Friend for the End of the World

- Steve Carell has proven to be a very solid draw, though his films tend to depend more on word of mouth than many other leading actors' do.
- Crazy, Stupid, Love. and Dan In Real Life serve as appropriate comparisons.  Both opened moderately, grew strong legs through word of mouth, and have given Carell a lot of goodwill with older audiences.
- It could have some sleeper potential as strong counter-programming to big blockbusters.  Direct competition is non-existent.

- Focus Features doesn't handle that many wide releases, so the theater location count could be a potential issue (especially when it comes to opening weekend).
- Mass appeal on a scale of that of Carell's other films will be more challenging to reach, especially during this time of year.  Last summer's Larry Crowne ($36 million) was a victim of similar circumstances.  This makes word of mouth even more crucial for success.

Tags: Brave, Abraham Lincoln: Vampire Hunter, Seeking A Friend At The End Of The World