Long Range Forecast: 'Rock of Ages' and 'That's My Boy' 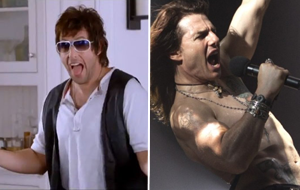 This week we've added That's My Boy and Rock of Ages to our Long Range Forecast.  Both films are set to release nationwide on Friday, June 15.

- Cruise built up some comedic goodwill after his popular Tropic Thunder cameo.  Mission: Impossible - Ghost Protocol has also helped to repair his image among women.
- Mamma Mia! & Hairspray opened to over $27 million each and showed legs throughout their summer runs.  Rock's popularity as a stage musical, plus its large and appealing cast, could help it reach similar heights.
- The appeal to men could be stronger than Mamma Mia! and Hairspray.
- Female moviegoers may go nuts for this kind of film.  Plus, who doesn't love 80s songs?

- Appeal with women under 25 and teens could still be a tough sell compared to Hairspray and Mamma Mia!, especially sandwiched in between Snow White and the Huntsman and Brave.
- With recent 90s nostalgia-driven releases being met with relatively soft responses, there could be a similar reaction with regard to 80s nostalgia.
- There may be a potential audience overlap between it and That's My Boy.

- There's not much in the way of summer comedies up to this point, especially if The Dictator ends up posting lackluster numbers.
- Sandler still has his fanbase, even if it is shrinking over time.  While the overall product has slipped drastically, it generally hasn't been matched by the dip in tickets.
- The R rating could bring some older Sandler fans back.
- Andy Samberg has a decent following of his own.
- Although somewhat played down in the trailer, wedding-themed comedies tend to find success during this time of year (see The Hangover films, Bridesmaids, The Proposal, Wedding Crashers, etc.)

- The R rating will keep some of Sandler's younger fans away (a crowd that helped drive the success of Grown Ups).
- It faces serious competition for women from Rock of Ages and likely for men from Prometheus's second weekend.
- Grown Ups opened to $40 million, but that also had Kevin James and a "whole greater than the sum of its parts" supporting cast.
- Sandler didn't do himself any favors with Jack & Jill last November.  That's My Boy could pay the price for that flick.