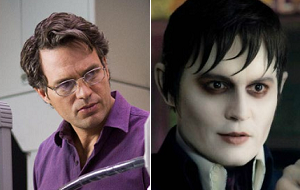 Marvel's The Avengers is poised to become the first film in history to make $100 million during its second weekend theaters. Dark Shadows will be, well, living in Avengers' shadow.

With more than $744 million in the bank worldwide, The Avengers is performing well beyond expectations—a worldwide gross of at least $1 billion is guaranteed. The Disney release is certainly not dividing audiences into love it/hate it camps: it currently boasts an impressive 96% combined approval rating on Flixster from 248,000+ users. The Avengers will likely hold on to the #1 spot until Men in Black 3 opens on May 25.

As of 4 p.m. PT, Fandango reports that The Avengers accounts for 84% of daily sales.

Look for The Avengers to post a sophomore haul of $111 million.

The Tim Burton/Johnny Depp combo is one of the most reliable director/actor pairings in Hollywood history. It has produced timeless classics (Edward Scissorhands), cult favorites (Ed Wood) and $1 billion-worldwide juggernauts (Alice in Wonderland). Dark Shadows looks as though it will fall somewhere in the middle of the spectrum. Die-hard fans of the original Dark Shadows show are bound to show up, but they probably won't bring their kids. It's clear that Dark Shadows isn't nearly as family friendly as Alice in Wonderland—a fact that will hurt it at the box office.

Fandango reports that Dark Shadows accounts for 7% of daily sales.

The Best Exotic Marigold Hotel finally opens stateside this weekend after already raking in more than $70 million internationally. The Fox Searchlight release will post solid numbers during what's sure to be a lengthy theatrical run in markets where arthouse-friendly flicks excel.