Weekend Predictions: 'Marvel's The Avengers,' 'Battleship,' 'The Dictator' and 'What to Expect When You're Expecting' 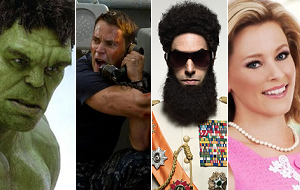 Marvel's The Avengers should have no problem shaking off competition from Battleship, The Dictator and What to Expect When You're Expecting in order to stay #1 during its third weekend in domestic theaters.

It's now clear that The Avengers will be able to hold on to the #1 spot until Men in Black 3 opens on May 25—which will give the Disney release an impressive 18-day run in first place. Cultural sensations the size of The Avengers don't come along very often, and the superhero flick has now become a must-see for everyone from pre-teens to middle-aged adults.

As of 4 p.m. PT, Fandango reports that The Avengers accounts for a solid 44% of daily sales.

The Avengers looks poised for $56.5 million this coming weekend.

Universal is trying to mimic Paramount's success with two Hasbro properties—Transformers and G.I. Joe—by bringing Battleship to the screen. Unfortunately, the Peter Berg-directed film is already being widely mocked for not only having little to do with the actual board game but also being a blatant Michael Bay rip-off. As a result, opening-weekend expectations are much closer to the $54.7 million debut of G.I. Joe in 2009 than Transformers' $70.5 million opening weekend in 2008.

Fandango reports that Battleship is responsible for 11% of daily sales.

Battleship should bring in $47 million from around 3,750 locations.

Sacha Baron Cohen has been trying hard to generate headlines by appearing publicly in character as The Dictator's General Aladeen. Whether or not that will translate into tickets being purchased remains to be seen. A lot of moviegoers were turned off by Bruno and the idea of watching a comedy that cracks jokes about terrorism may seem even less enticing. The Paramount release needs to generate controversy after it opens in order to stay relevant during a typically competitive summer season.

Fandango reports that The Dictator boasts 30% of daily sales.

What to Expect When You're Expecting will try to follow in the footsteps of Valentine's Day, New Years Eve and Think Like a Man. The Lionsgate release should serve as a nice bit of counter-programming to all the explosions, fighting and general mayhem that Avengers and Battleship rely upon.

Fandango reports that What to Expect accounts for 3% of daily sales.

Look for What to Expect When You're Expecting to grab $15 million from 3,021 locations during its debut frame.

Tags: Marvel's The Avengers, Battleship, The Dictator, What to Expect When You're Expecting