How Big Will 'The Dark Knight Rises' Be? 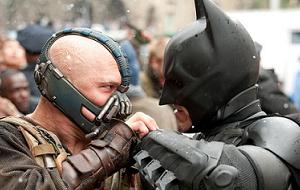 When I called my local multiplex on Monday evening about The Dark Knight Rises, the conversation went something like this:

Me: "Are tickets still available for the midnight show of The Dark Knight Rises in IMAX?"

Interest in The Dark Knight Rises has been building at a rapid pace ever since the first bit of casting news was announced. Now, with tickets on sale at most locations since Monday, anticipation is reaching fever pitch.

The official Dark Knight Facebook page is full of comments by people bragging about having tickets. The level of obsessiveness is staggering. A sample comment:

Jamahl David Thompson: Got mine. Midnight screening Perth, WA. Watch the movie...home to bed...get up...go to the movie again!

Fandango and MovieTickets.com have both been hit with a wave of activity as die-hards and casual fans alike look to avoid sold-out shows. With midnight grosses reaching as high as $43.5 million—a new record set by Harry Potter and the Deathly Hallows: Part 2 last summer—it's no longer safe to assume that only hardcore fans will show up that late.

"The tremendous demand of advance ticket sales for the previous films within the Batman franchise prove that moviegoers are eager to see these movies," says Joel Cohen, CEO of MovieTickets.com. "We are already seeing a similar trend for The Dark Knight Rises—with fans reserving seats for showtimes nationwide and around the world to ensure they are among the first to see this movie."

Boxoffice.com is currently predicting a $186 million debut frame. Why don't we think it can top the $207.4 million opening-weekend haul of The Avengers? Two main reasons: 1) TDKR won't be able to benefit from 3D tickets and 2) Disney marketed Avengers as being family-friendly, while TDKR comes across as too brooding and intense for young children.