Weekend Predictions: 'Brave,' 'Abraham Lincoln: Vampire Hunter' and 'Seeking a Friend at the End of the World' 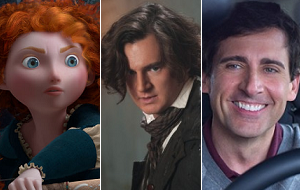 Brave is poised to end Madagascar 3's run in first place at the box office this coming weekend.

Disney/Pixar have earned a massive amount of mainstream trust over the years. They'll cash in on that trust once again with Brave, the first Pixar effort to feature a female protagonist. Brave will tap into the current surge of interest in films with strong women in leading roles. Women are sending a message to Hollywood that they are sick of only being love interests. Unfortunately, being so female-friendly means Brave might lose males. No matter. Women helped turned The Hunger Games into a $650 million+ worldwide hit, and they are bound to show up in droves to support Brave.

As of 4 p.m. PT, Fandango reports that Brave is responsible for 39% of daily sales.

Look for Brave to tally $59 million from around 4,000 locations during its debut frame.

Abraham Lincoln: Vampire Hunter is shaping up to be one of the summer's biggest duds. The premise just doesn't seem to be catching on outside of fanboy circles, which wouldn't necessarily be a problem if Vampire Hunter had an A-list actor to draw people in. It doesn't. The marketing blitz has not been very aggressive over the last couple of a weeks—a clear sign that Fox is already trying to minimize their loses.

Fandango reports that Vampire Hunter has yet to crack the top five sellers list.

Seeking a Friend for the End of the World will work as counter-programming to typical summer fare. The strong performance of Moonrise Kingdom and The Best Exotic Marigold Hotel proves once again that films without explosions and aliens can compete in the summer. Critics are also being kind to End of the World, so strong word-of-mouth could keep it alive for weeks to come.

Fandango reports that End of the World has yet to make an impact.

Seeking a Friend at the End of the World should bring in $8.5 million from around 1,400 locations during its debut frame.

Tags: Brave, Abraham Lincoln: Vampire Hunter, Seeking a Friend at the End of the World