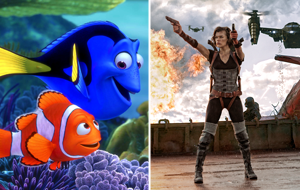 - The film was extremely well-received during its initial release in 2003 and is regarded as a modern day family classic.
- The marketplace for family films will be empty at the time of its release.
- The Lion King found great success with its 3D re-release this time last year, and Nemo might be better compared with it than other recent re-releases in terms of how popular it is with today's family audiences.

- Only two weeks separate it from the release of Sony's Hotel Transylvania, which could lead to front-loading unless it takes off the way The Lion King 3D did last year.
- Audiences appeared to be suffering from 3D re-issue fatigue earlier in the year with Star Wars: Episode I and Titanic, though that may be a distant memory come September.

- Thanks in part to the addition of 3D, 2010's Resident Evil: Afterlife was the highest grossing film of the franchise.
- The franchise has been a very consistent performer over the years and could continue to follow a similar trajectory as the Underworld series.

- As the fifth film of the franchise, could this be one film too many?
- The franchise has always been very front-loaded towards opening weekend.

Notable changes on our forecast this week include The Watch and Step Up: Revolution.