Weekend Predictions: 'The Dark Knight Rises,' 'The Watch' and 'Step Up Revolution' 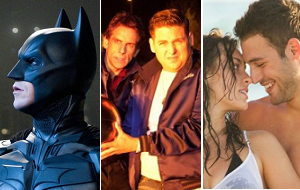 The Dark Knight Rises will have no problem fending off The Watch and Step Up Revolution in order to retain the #1 spot at the box office this coming weekend.

Word of mouth is very strong for The Dark Knight Rises. More than 397,000 Flixster users have combined to give the Warner Bros. release a healthy 93% approval rating. There will be plenty of repeat viewings happening this weekend thanks to the film's ambiguous ending. Director Christopher Nolan has crafted a superhero movie that all others will be compared to, and the artistic achievement will pay off financially.

As of 4 p.m. PT, Fandango reports that TDKR accounts for a dominant 80% of daily sales.

Look for The Dark Knight Rises to rake in $66 million during its sophomore frame.

The Watch boasts a comedic trifecta that any studio would kill to have. The combined drawing power of Vince Vaughn, Ben Stiller and Jonah Hill ensures that The Watch won't be a complete dud. Unfortunately, going up against TDKR won't be easy—Nolan's flick could hurt The Watch quite a bit. It's also easy to argue that Ted has already sucked up a lot of the business available for R-rated comedies. Expectations for The Watch are modest compared to past numbers posted by Stiller, Vaughn and Hill.

Fandango reports that The Watch has yet to have an impact when it comes to online sales.

The Watch should take in $21 million from around

Step Up Revolution adds political themes to the insanely popular Step Up franchise. Fans of the series are clearly looking for escapism, so the protest aspect could be a turn off to some. Yet even if that's the case, Step Up Revolution will appeal to teenage girls—a group that's largely neglected by Hollywood during the summer season. This probably won't be the last Step Up movie we see.

Fandango reports that Step Up Revolution has not cracked the top five sellers list.

Look for Step Up Revolution to take in $14 million during its debut frame.

Tags: The Dark Knight Rises, The Watch, Step Up Revolution