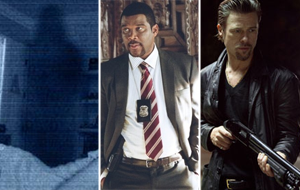 - Comparable to the first few yearly Saw films, the opening weekend draw could hold relatively steady.
- As was the case last year with Paranormal Activity 3, this will face very little competition from other horror options.

- Although Paranormal Activity 3 seemed to generate slightly better reviews and word of mouth, it still ended up more front-loaded than the second film.
- Having a Tyler Perry-led film opening against it could lead to some potential audience crossover.
- Third sequels typically start to show fatigue in most franchises, potentially leading to a drop-off from the performance of Paranormal Activity 3.

- The character of Alex Cross could help Tyler Perry appeal to a larger audience.
- After declining grosses the past few years, Perry bounced back nicely this summer with the performance of Madea's Witness Protection.

- Perry's fan base has proven that outside of comedy they aren't as willing to watch him on the big screen (see Good Deeds).
- Opening against Paranormal Activity 4 won't be an easy task.

- The drawing power of Brad Pitt and the presence of a strong supporting cast.
- Early reviews have been positive and the trailer has been well received.

- The Assassination of Jesse James has a cult following, but nobody saw it in theatres.
- Killing Them Softly could prove to be one of Pitt's less mainstream films.
- Will face direct competition from the second weekend performance of Argo.

Notable changes on our forecast this week include Lawless, The Possession, Finding Nemo 3D and The Words.