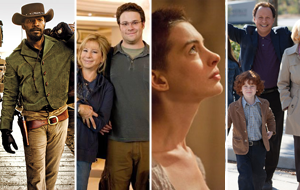 The final slate of new wide releases for 2012 completes our Long Range Forecast for the calendar year. With the lucrative holiday season in full force, The Guilt Trip will now open on Wednesday, December 19. The final three films are currently slated to hit theaters on Christmas Day (Tuesday, December 25): Django Unchained, Les Misérables and Parental Guidance.

Also, due to the re-scheduled wide release date of January 11, 2013, Zero Dark Thirty has been temporarily removed from the forecast.

- Online anticipation appears to be quite high.
- Quentin Tarantino coming off the box office and critical success of 2009's Inglourious Basterds. Django Unchained is likely to please his fans as well.
- With The Great Gatsby no longer in the holiday picture, Leonardo DiCaprio won't have to compete against himself.

- Given the film's subject matter and Tarantino's filmmaking style, a break-out performance along the lines of 2010's True Grit could be tough, especially during the holidays.
- Tarantino's subject matter isn't always a mainstream attraction, evidenced with box office under-performers such as Jackie Brown and his Death Proof half of Grindhouse.
- The amount of competition for adult audiences is incredibly high during Oscar season.

- With the combination of Rogen and Streisand the film has the potential to appeal to different audiences.
- Christmas is usually a good time to release comedies, especially when it comes to holding power.

- Opening against This Is 40, which seems to have the better early buzz of the two comedies.
- Barbra Streisand was once a very strong box office draw, but it has been 16 years since she was last in a leading role (1996's The Mirror Has Two Faces).

- The popularity of the long-running stage musical.
- Buzz for the film has already reached general audiences with early trailers and early Oscar buzz, particularly for Anne Hathaway in a situation not unlike Natalie Portman back in 2010 (which helped drive Black Swan to major box office success during the late holiday and Oscar seasons).
- Tom Hooper delivered a true crowd pleaser with The King's Speech. Can he do it again here?
- Has the potential to appeal towards a number of different demographics, which is usually a big advantage during the holiday season.

- Musicals, even those with significant built-in audiences, can be hit or miss at the box office.
- While it was a very different situation and a long time ago, the 1998 non-musical version of Les Miserables was a box office disappointment.
- The amount of competition for adult audiences. Although, some may argue this film *is* the competition for those audiences.

- The relative lack of strong family options this December, outside of The Hobbit.

- Billy Crystal and Bette Midler is a box office combination better suited for 1992 than 2012.
- The film's trailer likely won't appeal to younger audiences. Adults likely won't drag the kids to this with that in mind, even during the holiday season.

Notable changes on our forecast this week include Skyfall and the removal of Zero Dark Thirty until re-publication in two weeks.