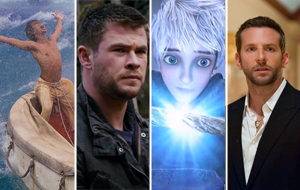 The Twilight Saga: Breaking Dawn - Part 2 and Skyfall still have so much momentum heading into the weekend that they probably won't fall from the #1 and #2 spots, respectively.

- Being based on a popular book gives it a built-in audience.
- The uplifting story is perfectly timed for the holiday season when audiences are looking for family fare.

- The amount of competition in the November marketplace will make it hard to stand out.
- The trailers for the film are intentionally vague. That could turn off movie-goers who are used to being spoon fed plot points

- Star Chis Hemsworth is coming off the success of The Avengers.

- The film's numerous production issues and soft marketing have long indicated this may be more of a "dumped" November title than a potential holiday hit.
- The original film isn't particularly well-known among today's audiences.
- Skyfall is still going strong.

Rise of the Guardians

- Releasing during Thanksgiving weekend guarantees it some attention from families, especially given the holiday themes of the film.
- Disney has previously found a lot of success with the same release (see Enchanted and Tangled), so DreamWorks is hoping to capture something similar.

- Wreck-It Ralph is still doing really well. It'll be tough for Rise of the Guardians to steal attention away from it.
- Reviews indicate that parts of the film are dark. Some families with young children could be turned off.

- Strong Oscar buzz.
- The Weinstein Company will put a lot behind this one now that The Master bombed.
- One of the year's most impressive ensemble casts.

- Bradley Cooper's stardom is still growing and is thus not a proven box office draw. Same for Jennifer Lawrence.
- The subject of the film may not be as mainstream-friendly as O'Russell's previous hit, The Fighter.

Check out our predictions for these films and the rest of the weekend's top 10 in the table below.