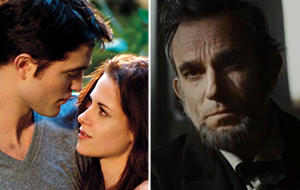 The anticipated finale to the Twilight series unleashes this weekend as fans pile into theaters one last time since the five-film series began four years ago.

Lincoln expands to a wide release this weekend and it should do very well on its own terms even though it will be overshadowed by Breaking Dawn - Part 2 and Skyfall.

- The franchise has become remarkably consistent in its opening weekend and long-term performances. The finale should continue that pattern, despite the fact that Breaking Dawn - Part 1 indicated some minor audience drop-off.
- Could a finale factor be in play here as it was for Harry Potter in 2011?
- Will this year's Pattinson-Stewart drama help create any last minute curiosity in the franchise?

- The buzz for Twilight's finale hasn't seemed to measure up to that of the final Potter film in 2011, so the hardcore fans may continue to be the driving force which would largely prevent a box office bump from the predecessors.
- Did this year's Pattinson-Stewart drama push away any die hard fans?
- Skyfall's strong opening could have a negative impact

- Steven Spielberg, one of the most beloved presidents in history, and the all-star cast will demand attention from audiences, especially now that word of mouth is building after a successful limited opening last weekend.
- The marketing push began early and focused several TV spots during key television events, including the presidential debates.

- Historical dramas are hit and miss, something Mr. Spielberg himself encountered with 1997's Amistad.
- Opening weekend demand could be softer than expected, but this is the kind of film that's built more to play through the holiday and Oscar seasons.

Check out our predictions for these films and the rest of the top 10 in the table below.