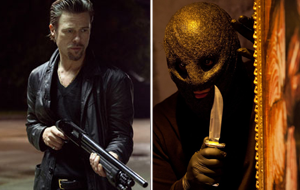 Following a record-breaking Thanksgiving weekend, audiences will take a pause in between two major holidays while studios follow suit. Killing Them Softly and The Collection are the only scheduled wide releases for this weekend.

Fandango reports that The Hobbit: An Unexpected Journey currently leads activity on the site with 17% of all sales today. Breaking Dawn - Part 2 is close behind with 16%, followed by Lincoln (13%), Life of Pi (9%) and Skyfall (7%).

- Brad Pitt's presence gives this otherwise under-the-radar pic a fighting chance for intriguing some audiences.
- Early reviews have been solid.
- Twitter activity hasn't been impressive, although the film's 98% "want to see" score across 24,000+ Flixster voters is strong.

- Demand for a new film the week after a record-breaking holiday - especially given the amount of competition in the market currently - will be considerably low.
- The film's marketing campaign has been quite subtle. On top of the numerous release date changes over the past year, awareness seems lacking for a Pitt movie.

- Reviews are strong, so the die hard horror audience could turn out.
- Horror fans don't have much in the market place to check out right now, especially after the disappointing word of mouth surrounding Paranormal Activity 4.

- Releasing a horror film after Halloween hasn't historically led to big box office.
- The low 1,700 theater count will work against it.

Check out our predictions for these films and the rest of this weekend's top 11 in the table below.

Tags: Killing Them Softly, The Collection