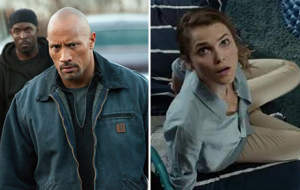 Joining our Long Range Forecast this weekend are two films scheduled to open on Friday, February 22, 2013: Dark Skies and Snitch.

- Dwayne Johnson has experienced a career resurgence with Fast Five and Journey 2.
- The Rock will likely be in the middle of having added attention from the lead up to WrestleMania in early April.

- The film may come across as too similar to some of Johnson's previous vehicles. Fans will wait for Johnson's higher profile 2013 films instead.
- Will face major competition from the second weekend of A Good Day to Die Hard.

- Will have the horror marketplace all to itself when it opens.
- Will hope to attract the same crowds that made Insidious a surprise hit back in 2011.

- The trailer is very by the numbers; doesn't appear to offer a lot to horror fans.
- Opening the week before The Last Exorcism Part II could lead to increased front-loading.

Notable changes on our forecast this week include Texas Chainsaw 3D, A Haunted House and Movie 43.