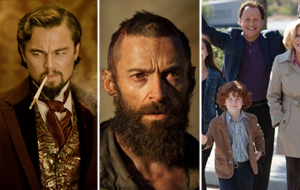 Crowds will be in full force this weekend as audiences have their plates filled with eight new releases since December 21. This final weekend of 2012 should be a big one thanks to the rush of adults and kids alike between the lucrative Christmas and New Year's holidays.

- Quentin Tarantino's established fan base plus his added appeal coming off the huge success of Inglorious Basterds three years ago gives this some of the highest upfront awareness that a Tarantino film has ever had.
- The all-star ensemble cast will attract a variety of audiences.
- Marketing has been steady and consistent while reviews are excellent.

- The Christmas-timed release for a violent film could put off some moviegoers.

- The musical stands as one of the most beloved of all-time.
- An all-star cast helps to turn this into even more of a must-see film for the general audience.
- Reviews have been solid and the film is already generating significant Oscar buzz, particularly for Anne Hathaway and Hugh Jackman.
- Pre-sales on Fandango reached record status for a Christmas release, topping their 2009 advance sales activity for Sherlock Holmes.

- Musicals are hit and miss at the box office. Could Les Miserables be front-loaded by its fans?

- Billy Crystal, Bette Midler and Marisa Tomei offer some familiarity for adult audiences.
- The family market is relatively empty right now with Monsters, Inc. 3D performing at low levels and The Hobbit remaining the only viable option since November releases.
- Past family comedies released at this time of year have over-performed. See: Cheaper by the Dozen.

- The older cast could easily be a turn-off for younger audiences.
- Are Crystal and Midler still strong enough box office draws for older crowds?

Check out our predictions for these films and the rest of this weekend's top 10 in the table below.