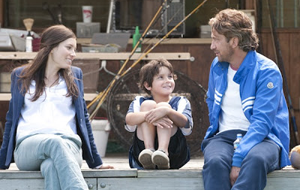 As the calm before the Hobbit storm hits next week, this weekend sees the entry of only one new wide release. Holdovers will continue to dominate the box office this weekend. In fact, in a potentially rare occurrence for a film in its fifth week of wide release, Skyfall could be in position to return to the #1 position.

- Butler and Biel offer some recognizable faces to draw in audiences.
- Date night crowds could end up picking this one if they've already seen the other options in the market currently.

- Neither Butler nor Biel have a strong box office resume coming into the film.
- This first full weekend of December is typically slower, especially as audiences wait the bigger films coming later in the month.
- Audiences have shown they're looking for something for fresh. The film's marketing hasn't done much to show that its outside the cookie cutter formula.
- Twitter activity has been sluggish, even in comparison to New Year's Eve (which flopped on this same weekend one year ago).

Check out our predictions for Playing for Keeps and the rest of this weekend's top ten in the table below.