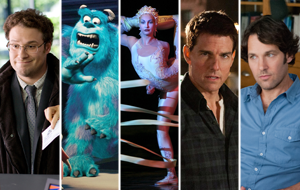 The peak of holiday season kicks into full gear this week with five new wide releases joining the market. The Guilt Trip and Monsters, Inc. 3D open on Wednesday, December 19 while Jack Reacher, This Is 40 and Cirque Du Soleil: Worlds Away launch on Friday, December 21.

Meanwhile, The Hobbit: An Unexpected Journey is expected to hold well as families begin turning out during the holiday rush. Due to the high midnight figure on its opening day, expect a sizable Friday-to-Friday drop followed by some stabilization for the film. The remainder of the market should also exhibit good holds.

- Seth Rogen still has his fans out there, and Barbara Streisand could bring in the older female audience that Rogen lacks.
- Opening the week before Christmas gives it a chance to spread its wings over the long run - pending good word of mouth.

- Rogen's box office draw has never fully established itself while Streisand's audience is getting older and could easily opt for This Is 40 this weekend.
- The market is highly competitive for adult audiences beginning this weekend.
- Reviews are looking sour.

- The Pixar name and "new animated classic" status of the film give it an advantage.
- Outside of The Hobbit, families haven't had much to choose from since Rise of the Guardians disappointed in its opening last month.

- 3D re-releases tend to be more "flop" than "hit", as evidenced by Finding Nemo 3D's lackluster run during the fall months.

- Tom Cruise is still an A-list star and comes off the success of last year's Mission: Impossible - Ghost Protocol with a potential franchise-starter.
- Audiences haven't had an action flick to choose from since Skyfall.

- Cruise has been back in the public eye this year, and not in a great way. He's also coming off the box office disappointment of Rock of Ages.
- With the enormously positive reception toward Skyfall, audiences may be even more picky than usual when it comes to this genre.

- Paul Rudd and Leslie Mann are part of the Judd Apatow draw, which got a big boost thanks to last year's Bridesmaids.
- Selling the film as a "sort-of sequel" to Knocked Up gives audiences something familiar to latch onto.
- The lack of adult comedies lately could result in a higher demand than usual for this kind of film.
- Early word of mouth has been positive.

- Cirque Du Soleil has its fair share of fans out there. Their IMAX film grossed over $15 million back in 2000.

- With a slew of new releases opening against it this week and next, its hard to imagine this specialty film finding much of an audience.

Check out our predictions for these films and the rest of this weekend's top 11 in the table below.