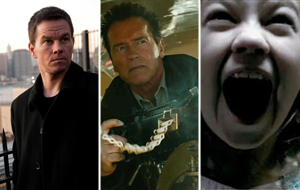 Three new films go into wide release this weekend as part of the extended 4-day weekend in honor of Martin Luther King Day (Monday). Broken City, The Last Stand and Mama will each debut on Friday, January 18.

- Mark Wahlberg has a reputation for being able to exceed expectations at the box office recently. Last January's Contraband particularly comes to mind.
- The added appeal of Russell Crowe and Catherine Zeta-Jones, while beyond their peak as draws, could play a role too.

- Competition for the adult audience is stiff right now with Oscar nominees getting a boost.
- Opening against The Last Stand will cut into its potential.
- Twitter and Flixster activity have been lacking.

- Arnold's return to a leading role will entice his fans.
- The film's early critical response is better than many expected. Could this sway some last minute viewers?

- Again, current market competition limits any potential breakout.
- The Expendables 2 opened softer than expected last summer despite heavy marketing that featured Arnold and a number of other action stars.
- Social media activity has been slow.

- The PG-13 rating guarantees a teenage audience's ability to show up.
- Recent horror breakouts, namely 2012's The Devil Inside, give the genre a strong track record on opening weekend.
- Guillermo del Toro's name has been featured heavily in the marketing which will at least bring out some of his niche fan base.
- Jessica Chastain is riding a wave of buzz thanks to her award-winning presence in last week's #1 film, Zero Dark Thirty. Could there be some spillover to Mama for her growing fan base?

- Facing two new openers plus existing competition is more than Devil Inside faced last year when it opened January practically by itself.
- Did Texas Chainsaw 3D dilute any of the demand for another horror flick so soon?

Check out our 4-day weekend predictions for these films and the rest of the top 12 in the table below.