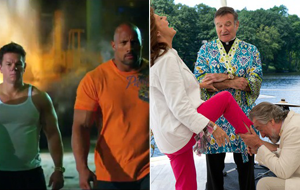 The final weekend before the 2013 summer movie season kicks off will see the debut of two new films: Michael Bay's Pain and Gain and a timely wedding comedy, The Big Wedding.

- A collective cast that includes Robert De Niro, Amanda Seyfried, Katherine Heigl, Diane Keaton and Robin Williams.
- Wedding-themed films tend to have at least respectable showings at the box office, especially during the spring.
- DeNiro is coming off the recent success of Silver Linings Playbook and has found further success with wedding and family-themed films in the past with the Meet the Parents franchise.

- De Niro, Williams and even Heigl have all seen better days when it comes to their box office drawing power.
- While in this case a spring release date should be more beneficial than the previous October one, being pushed back typically isn't a good sign.

- The combination of Dwayne 'The Rock' Johnson, Mark Wahlberg and Michael Bay provides plenty of box office star power.
- As a result of that star power, likely to receive a relatively large marketing push for a film of its size.
- The true size of Michael Bay's fanbase could prove to be a wild card for the better or for the worse.

- Too much Johnson and Wahlberg? It will be the third film of 2013 for Johnson and second film of 2013 for Wahlberg, with more 2013 films still on the horizon for both.
- There is likely to be a lot of overlap between the fanbases of Johnson, Wahlberg and Bay.
- Opening in between Oblivion and Iron Man 3 will not be easy to say the least. Likely to be quite front-loaded towards opening weekend.

Notable changes on our forecast this week include Oz: The Great and Powerful and Dead Man Down.