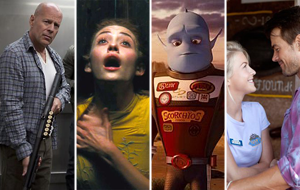 Three new films go into wide release on Valentine's Day, with one more joining the fray on Friday as all four aim to capitalize on the extended President's Day (Monday) weekend. A Good Day to Die Hard, Beautiful Creatures, and Safe Haven open on Thursday, February 14. Escape from Planet Earth will now open on Friday, February 15.

A Good Day to Die Hard

- The franchise name makes this the year's first high profile action flick.
- The fourth film was a success and the return to an R rating could interest the series' older fans again.

- Early reviews are in the cellar.
- The fourth film, while financially successful, didn't really win over any new fans.

- The film could appeal strongly to teens on a weekend when they're likely to be out in full force.

- The novel's popularity isn't on the level of Hunger Games or Twilight.
- A lack of major stars and a crowded market could easily mean this gets overlooked by general audiences.

- Opening near (on, in this case) Valentine's Day weekend has proven to be a successful strategy for similar titles like The Vow, Valentine's Day, and Dear John.
- Nicholas Sparks has a steady following, both with his books and the movies based on them.

- Without a star like Channing Tatum, can this break out on the same level as those films?
- The film should be front-loaded to its opening day on Thursday with a significant drop-off throughout the weekend itself.

- Being the first family movie to open since December is a strategy that worked wonders for Gnomeo & Juliet two years ago.

- With more generic CG animated films making their way into theaters over the last few years, it will be difficult to make this stand out from the crowd.

Check out our 4-day predictions for these films and the remainder of the top 11 in the table below.