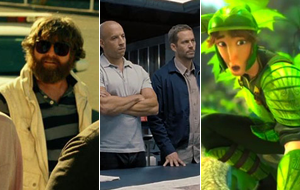 Arguably the most competitive box office weekend of 2013 will see a battle between The Hangover Part III and Fast & Furious 6 as they open on May 24 ahead of Memorial Day. Fox's Epic will also join the fray in an effort to capture some of the family audience not looking for big action films.

- While not as well received as the first film, The Hangover Part II was still a massive success with its $254.5 million domestic run.
- Being the first major high profile comedy of the summer is usually good for box office prospects. Furthermore, audiences may be especially starved for a comedy by late May given the lackluster performances of this year's spring comedies.
- The Memorial Day opening combined with the franchise's established audience should boost upfront ticket sales, although the potential for some back-loading is higher for this installment given the following week's releases (and depending on word of mouth).
- The Ocean's Eleven series managed to stay relatively flat with their box office totals despite Ocean's Twelve disappointing some audiences.

- There does seem to be the possibility that this could be one film too many for part of the fanbase, especially after the lukewarm reception to The Hangover Part II.
- Opening directly against Fast & Furious 6 will cut into both films' predominately male audiences.
- With the competition from Fast & Furious 6 and Star Trek Into Darkness, the film's opening weekend take should drop off significantly from that of The Hangover Part II. Though it is possible that The Hangover Part III could display stronger holding power.
- Past franchises such as Transformers and Pirates of the Caribbean saw their third films lose nearly one-quarter of the preceding films' ticket sales when the second film wasn't as highly regarded as the original. They may be more comparable than Ocean's when considering the larger audience the Hangover movies boast.

- The previous two films have revitalized the franchise. Fast Five in particular set new heights for the series at the box office as well as among critics and audiences.
- The film's Super Bowl spot was arguably the most buzzed-about earlier this year.
- Giving this installment a summer opening--especially on Memorial Day weekend--could potentially result in an even bigger opening than Fast Five's $86.2 million.
- The Fast & Furious series has become increasingly popular with urban audiences, a crowd which will certainly turn out again here.
- Fast Five having out-grossed Thor (which opened one week later) could be a good sign for Fast & Furious 6 in its battle with The Hangover Part III.

- There is likely to be a high level of audience overlap with both The Hangover Part III and Star Trek Into Darkness. There may only be so much money to go around in a relatively short window of time.
- Will be tough to duplicate the relatively strong holding power of Fast Five.
- At some point, every franchise reaches the peak of its ability to expand and/or retain its audience.

- Will be the first animated film in the marketplace since The Croods. As recently seen with The Croods, limited direct competition is often very beneficial for family films.
- Fox and Blue Sky Studios have a good history at the box office together going back to 2002's Ice Age, though up to this point Epic feels less marketable than their previous efforts together.

- As we saw back in 2011 with Kung Fu Panda 2, audiences can skip a family film when parents have high-profile non-family options they want to see instead.
- While Epic will beat them both to the punch, family audiences may decide to pass on the film while they wait for Monsters University in June and Despicable Me 2 in early July.
- Given the strength of the May Schedule as a whole, it will have a tough time drawing in non-family audiences, which is often needed for animated films to truly break out.
- Early social network buzz tracking has been very tame compared to the Monsters and Despicable Me sequels.

Notable changes on our forecast this week include Evil Dead and Jurassic Park 3D.