Long Range Forecast: 'Now You See Me' & 'The Purge' 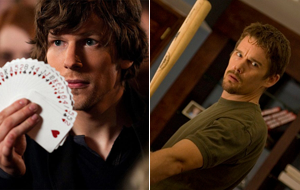 The calm after the storm of Memorial Day weekend sets in on Friday, May 31. Currently scheduled to open on that day are Now You See Me and The Purge.

Now You See Me

- Opening after Star Trek Into Darkness, The Hangover Part III, Fast & Furious 6 and before June 7's After Earth won't do it any favors.
- With rare exception, the weekend after Memorial Day isn't typically known for break-outs.

- Ethan Hawke recently helped Sinister turn into a solid box office hit.
- There isn't much in the way of thrillers opening early on during the summer.

- Opening in between a number of blockbusters could easily result in this smaller profile thriller getting lost in the shuffle.
- With rare exception, the weekend after Memorial Day isn't typically known for break-outs.

Notable changes on our forecast this week include 42, Scary Movie 5, and Oblivion.

Tags: Now You See Me, The Purge