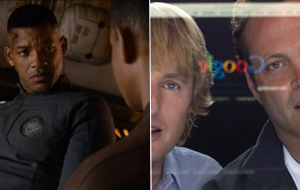 Our Long Range Forecast begins taking a look at June this week with the additions of After Earth and The Internship, scheduled to open on Friday, June 7.

- While he has been less prolific in recent years, Will Smith has a strong box office history, especially within the sci-fi genre.
- Sony will hope to duplicate the success it had back in 2006 when Will Smith and Jaden Smith starred together in The Pursuit of Happyness.
- M. Night Shyamalan obviously isn't the box office draw he once was, but he still has a fanbase of his own.

- While there should be plenty of space in the marketplace during opening weekend, the film will face major competition throughout the rest of June from the likes of Man of Steel, World War Z and White House Down.
- After Iron Man 3, Star Trek Into Darkness and to a lesser extent Oblivion, overall demand for yet another sci-fi film is likely to be less than it normally would be in early June.

- The re-teaming of Vince Vaughn and Owen Wilson, albeit eight years after Wedding Crashers.
- Director Shawn Levy has had a very solid box office history over the past decade.

- Opening two weeks after The Hangover Part III and five days before This Is The End isn't the best of release dates.
- Vince Vaughn is coming off two consecutive under-performers (2011's The Dilemma and 2012's The Watch).
- A comedy that reminds audiences of economic woes will likely still be a tough sell (2011's Tower Heist being a recent example).

Notable changes on our forecast this week include Oblivion and Pain & Gain.

Tags: After Earth, The Internship