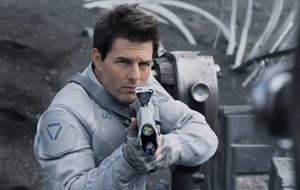 - Universal is banking on the star power of Tom Cruise combined with the big scale sci-fi genre in which he's had past success.
- As the only wide release of the weekend, competition will be minimal.
- The film's marketing campaign has heavily pushed the film as a pre-summer event.

- Cruise's star power has diminished, though it's becoming clear that he can still draw with the right film. Is Oblivion it?
- With 42 breaking out last week and now receiving strong word of mouth, some of Oblivion's potential audience could opt for a more sure bet instead.
- Social network tracking has been mediocre over the last few months.

Check out our predictions for Oblivion and the remainder of the weekend's top 10 in the table below.