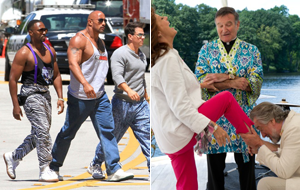 The final weekend before summer kicks off will see the release of Michael Bay's Pain and Gain alongside The Big Wedding.

- Michael Bay has become somewhat of an event name relative to most directors thanks to recent success with the Transformers series.
- Mark Wahlberg and Dwayne Johnson both have transformed into reliable leading men over the last few years.

- The smaller, more niche scope of the film is outside of Bay's wheelhouse.
- Opening on the final weekend before summer could result in low demand for a decidedly non-event movie.

- Wedding-themed comedies tend to at least find modest business around this time of year.
- The film's recognizable names such as De Niro, Williams, Heigl, and Sarandon could help.

- Wedding-themed comedies don't usually break out without significant buzz--something lacking with this film.
- Though the ensemble is relatively strong, none individually have proven to be a box office draw in awhile.

Check out our predictions for these films and the remainder of the top 12 in the chart below.