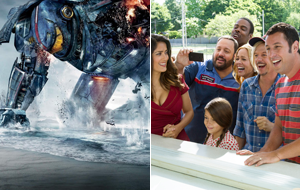 Joining our Long Range Forecast this week are Grown Ups 2 and Pacific Rim.

- The returning ensemble cast led by Adam Sandler. (Is anybody going to miss Rob Schneider? We don't think so.)
- The first film was a $271.4 million global hit thanks Sandler's fans and families in general back in 2010.
- With no major comedies opening after it, Grown Ups 2 could enjoy another leggy run.

- Sandler's recent efforts in Jack & Jill and That's My Boy have led to some of his worst box office performances.
- Can the appeal of this group of comedians strike lightning twice? The success of the original seemed like a fluke to some.
- It's very possible that its thunder could be stolen by The Hangover Part III and The Internship.

- Online buzz is reaching a boiling point, particularly among the fanboy crowd.
- Director Guillermo del Toro has a following all his own.
- As one of the summer's only original and non-sequel properties, audiences could flock to it with the promise of seeing something completely different.
- Unlike del Toro's previous movies, Pacific Rim could appeal heavily to younger audiences and fans of the Transformers movies.
- With limited blockbuster competition opening after it, solid word of mouth could drive a lengthy box office run.
- The mid-July date has been used by Warner Bros. to great effect in recent years with the Dark Knight sequels, Inception, and Harry Potter movies all finding great success in that slot.

- Online buzz doesn't always translate to real world anticipation.
- While del Toro's reputation is very positive, the fact remains that he doesn't have a big box office success on his resume yet. He's not a widely recognizable name outside of fans.
- Where the Transformers movies had a built-in appeal thanks to its established brand name, Pacific Rim will have to work more to entice audiences.