Long Range Forecast: 'The Mortal Instruments: City of Bones', 'The World's End', 'You're Next' 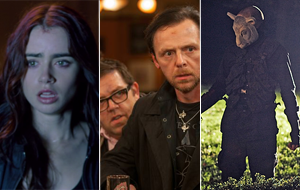 Three films have been added to our Long Range Forecast this week: The Mortal Instruments: City of Bones (opening Wednesday, August 21), The World's End, and You're Next (both opening on Friday, August 23).

The Mortal Instruments: City of Bones

- The over-saturation of young adult adaptations could take a toll on this as well.
- Opens just two weeks after Percy Jackson: Sea of Monsters enters the marketplace.
- Could have its potential limited by direct competition from fellow Sony release One Direction: This Is Us, which will be released the following week.

- Pegg and Frost may have a tougher time expanding their audience this time around, especially if there isn't much demand for another end of the world comedy after This Is The End.
- Likely won't receive the same level of marketing that Paul received.

- Lionsgate has a strong history of success with low budget horror films.
- While late August isn't a strong time for the box office in general, horror films often perform well at that time of year.

- The film's marketing could come across as feeling too similar to The Purge.
- Horror fans (especially younger ones) may pass on the film with Insidious Chapter 2 being released three weeks later.
- Opening against The Mortal Instruments and The World's End could limit potential of breaking out beyond horror buffs.

Notable changes on our forecast this week include Pacific Rim (down), Grown Ups (up), Turbo (up).

Tags: The Mortal Instruments: City of Bones, You're Next, The World's End