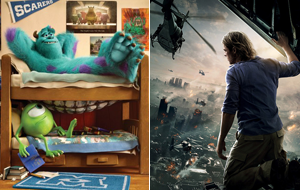 - The Pixar brand name.
- The original Monsters, Inc. was one of Pixar's biggest box office hits back in 2001.
- Aside from Epic, families with kids have been starved for animation this summer.
- Online activity has been consistently healthy via Twitter, Facebook, and Flixster.

- Nostalgia from older fans could be inflating some of the online hype.
- Prequels don't typically fare as well as their predecessors.
- Man of Steel is proving to draw well from the family crowd--could that affect Monsters?

- Brad Pitt has steadily turned into a reliable draw.
- The zombie genre is particularly hot right now, evidenced by the popularity of TV's "The Walking Dead".
- Built-in appeal to fans of the book (which the movie is very loosely based on).
- Online metrics are encouraging.
- Will Smith found great success with the similarly themed I Am Legend in 2007.

- Man of Steel may have stolen some of this film's potential thunder at the box office.
- The "zombie" aspect of the film has been pushed from the forefront.
- Audiences have had a lot of action films to choose from already this summer.

Check out our forecast for these films and the remainder of the top 11 in the table below.