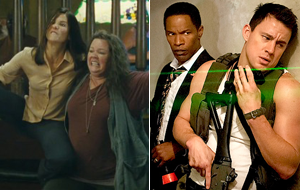 Closing out June, two new films open this weekend: The Heat and White House Down. Meanwhile, Monsters University is expected to hold the top spot for a second straight week.

- Melissa McCarthy is a certifiable "it" girl right now thanks to her success with Bridesmaids and Identity Thief.
- Sandra Bullock's streak of hits in recent years also helps to bump the appeal.
- Women have hardly been the focus of any summer films this summer.
- Facebook and Flixster activity are considerably stronger than where Identity Thief was at pre-release.

- Opening against White House Down will cut into its potential audience as some may favor seeing Channing Tatum's new movie.
- With several films breaking out in recent weeks, another one for the fourth major comedy of the summer could be too much to ask for. This could result in some back-loading, especially with a holiday around the corner.
- Twitter activity is significantly slower than Identity Thief at the same point.

- Channing Tatum is a certifiable "it" guy at the box office right now following last year's success with The Vow, 21 Jump Street, and Magic Mike.
- Jamie Foxx is also hot off the successful Django Unchained.
- Director Roland Emmerich is something of a brand name thanks to his history of disaster movies.
- The idea of a buddy-cop theme involving the President could help make it stand out from other action movies this summer.
- Flixster activity is significantly ahead of Olympus Has Fallen.

- Did Olympus Has Fallen satiate audiences' desire to see a White House-takeover film? (Not to mention G.I. Joe: Retaliation.)
- Opening against The Heat will cut into its audience as the two buddy-cop-themed flicks overlap certain demographics.
- With several films breaking out in recent weeks, one for another action movie this summer could be too much to ask for.
- Twitter activity is solid, but not much different than Olympus Has Fallen at the same point.

Check out our predictions for these films and the remainder of this weekend's top 11 in the table below.

Tags: The Heat, White House Down